With its steady job growth, low cost of living, and a booming cultural scene, San Antonio is the perfect place to call home. Here are six reasons why you should purchase property in this historic and energetic city.

1 - Cost of Living and Affordability

In recent years San Antonio property prices have been on the rise, but they are still lower compared to other big Texas cities like Houston, Austin, and Dallas, as well as the U.S. average. This financial status alone makes it a tempting and viable purchasing option.

If that weren’t inviting enough, the city also has the lowest down payments in the country, stable mortgage prices, and low-interest rates. The overall cost of living is considered slightly lower than the national average, so you’ll also be saving on day-to-day purchases.

In addition to this, the median home sale price also falls below the national median, so you can live comfortably here without breaking the bank. Because of this, more and more people are purchasing homes, increasing the demand and therefore the prices and home’s value–so buy now while you can.

San Antonio is the second largest city in Texas, after Houston, and its population is only growing. With an 8% increase from 2010 to 2014, it’s one of the fastest growing cities in the country. And millennials are a huge part of that growth, thanks to the strong job market with positions ranging from oil and gas industries to manufacturing and military jobs.

That said, the unemployment rate has also remained above the national average, even through the recession. This indicates that the market is a seller’s market, and so the property values are only going to increase as the population does. In other words, you should definitely take advantage of this. And even better, the community that occupies San Antonio is widely diverse with a large Hispanic population. This Mexican-American culture is showcased in the area’s food, music, and entertainment, and many establishments embrace bilingualism.

Population growth in San Antonio has been steady over the last few years, but not strong enough to overwhelm the real estate market, and this is largely due to the impressive job market. There are growing opportunities in renewable energy, bioscience, and manufacturing industries.

The area is also a proud military region, home to the Lackland Air Force Base, Fort Sam Houston, Camp Bullis, and the Randolph Air Force Base, which means plenty of opportunities for upward mobility in the armed forces. On top of that, the city also boasts ample positions in the leisure and hospitality industry. With so many jobs, the city is only expected to continue growing.

Although the second largest city in Texas, many locals claim San Antonio feels like a big small town. Each of the major neighborhoods are “incorporated cities” with their own fire and police department, and all fit the needs of different types of families and living styles.

Alamo Heights is considered the most charming and traditional, while Southtown is more eclectic, artistic, and urban. If you have a family (or trying to start one), Stone Oak is a perfect little community full of family-friendly activities and amenities. And a little further out from the city’s center is Helotes, a newer developed area with a variety of housing types, new buildings, and manicured landscaping.

San Antonio has a rich history that is still reflected throughout the food and architecture of the city. Foodies will love the Mexican food found in restaurants and food trucks scattered all across the different neighborhoods, as well the forever-favorite Tex-Mex and barbecue cuisine. Also known as “the Alamo city,” the architecture reflects the original Spanish and Mexican styles, however, today the area is truly a melting pot of cultures.

Thanks to this diversity, there are more than 100 cultural events each year within San Antonio, including the Ford Holiday River Parade, the Texas Folklife Festival, and the famous Fiesta, a 10-day salute to the Spanish heritage. In addition to this, Six Flags Fiesta Texas and SeaWorld San Antonio are also nearby and open year-round. It’s no wonder families and tourists alike flock here for fun.

When you think of Texas, the first thing that probably comes to mind is the heat. And while San Antonio can feel brutal from mid-July through August, the city's 300 days of sunshine are actually quite pleasant. During the winter months, below-freezing temperatures are very uncommon, so you can rest assured knowing you won’t ever need to bundle up. In fact, the average “winter” temperature is around 50 degrees. Other than that, spring and fall temperatures make up most of the year, making the hottest months well worth it. Plus, that’s why air conditioning was invented.

San Antonio is undoubtedly one of the most popular cities in the U.S. to purchase property. Are you ready to make the move? Contact us today for all your San Antonio real estate needs. 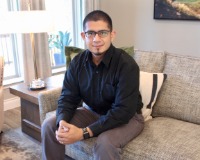 Victor Madrigal, from a young age, witnessed his father invest money, time, and labor into real estate. It was these memories that encouraged Victor to become a Realtor in 2009. After successfully obt....

When purchasing a new home, it’s important to do in-depth research on all facets of the homebuying process. One thing you’ll need to understand is how to best protect yourself and your

The Dos And Donts Of Accent Walls

Accent walls are in style and aren’t going away anytime soon. You have unlimited options for your accent wall color, and can even add texture! Accent walls should be just as special as you, and

What a journey this has been this far!! I’ve got a few more clients under contract . Closed on my 5th property with my 3rd client. This business venture is way different than what I thoughtS I’m